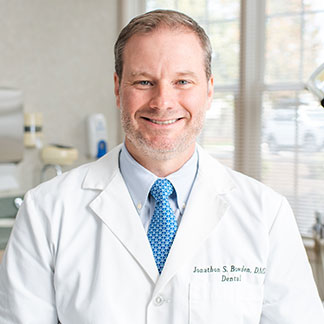 Dr. Jonathon Bowden was born and raised in Hunterdon County. He received his dental degree from the University of Pennsylvania, graduating in 1999. Upon graduating, Dr. Bowden Joined the US Navy as a Dental Officer. During his first year in the Navy, Dr. Bowden completed a one-year general practice residency which included in-depth training in hospital based dentistry, oral surgery, endodontics, implant dentistry, cosmetics, and all other facets of general dentistry. Upon graduation from his residency, Dr. Bowden was elected by his instructors to receive The Outstanding Dental General Practice Resident award.

Dr. Bowden completed his Naval Dental career by spending two years at sea on the USS TRUMAN and the USS NIMITZ followed by one-year shore based in San Diego. Dr. Bowden left the US Navy in August of 2003 and joined his father to practice dentistry in Flemington, where he has been ever since.